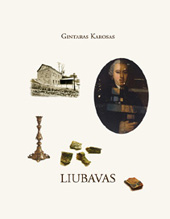 The first thing to mention when talking about fine arts in Liubavas is the painting collection consisting mostly of portraits of the Slizieniai (Slizien) family in the 18th-19th centuries. In 1940, the paintings were nationalised and taken over by Vilnius Museum. After the museum was rearranged into the Lithuanian Art Museum, the paintings became a part of its funds. A while ago, fifteen out of nineteen paintings from the manor have been discovered in the museum where they have been retained. They portray members of the Slizieniai family, who since Grand Duke Vytautas the Great took important official, court, military, and other positions in the Great Duchy of Lithuania. It may be noticed that a bit later the paintings took over some qualities of the Empire style; the portraits, except for the one of the early 19th century, are oval, and their composition reveals that the space around the portraits was simply cut.

The last owner of the manor, probably before the Soviet nationalisation, marked with chalk on the other side of the paintings their location in the manor. On the stretcher of one of the paintings you can see an inscription: Slizien between the oven and the credence. Three of the painted portraits are of a smaller format, and they do not have the inscription Slizien. Looking at the portraits, you can easily recognise the face of Stanislovas Poniatovskis's (Stanisław Poniatowski) competitor, candidate to the throne of the Polish-Lithuanian Commonwealth Mykolas Kazimieras Oginskis (Michał Kazimierz Ogiński) and his wife Aleksandra.

Painting came to Liubavas Manor together with the sculptor Rapolas Slizienis (Rafał Slizień) (1804-1881). According to Byelorussian historians, the family had the title of counts and, besides other manors in the Grand Duchy of Lithuania, owned the Dzeviontkovičiai Mansion, which was famous with its painting collection and a large library of old manuscripts. The collection of manuscripts and the library remained in Dzeviontkovičiai, while the painting collection or a part of it went to Liubavas Manor. Historian R. Aftanazis and other contemporaries of R. Slizienis recollect the sculptor's passion for collecting antiquities. It seems that Liubavas Manor was full of not only paintings but also heirlooms, furniture. In addition to the heirlooms above, there may have been a spectacular calfskin armchair of Vilnius Cathedral canon Tadeušas Slizienis (Tadeusz Slizień) (1728-1790) with the coat of arms of the Slizieniai family.

Rapolas's collection undoubtedly included a coat of arms cloth of Steponas Slizienis (Stefan Slizień) (?-1707), referendary and marshal of the Grand Duchy of Lithuania. This beautifully embroidered artistic cloth must have hung on the armchair of S. Slizienis, who was a high-rank official since 1705.

The furniture was transported together with paintings. The fact that it was very valuable was recorded even in the comments section of the seizure documents. The said furniture consisted of two carved leather armchairs with a high back and the coat of arms of the Slizieniai family imprinted on the leather, two leather chairs, an English clock by M. Rufsell and a metal chandelier. According to furniture experts, the armchair with the coat of arms imprint currently kept in the Museum of Applied Art is one of the most valuable examples of such furniture.

Children of Rapolas Slizienis could be also called artistic people. His daughter Marija was a sculptor. She married Ipolitas Domeika and lived in Munich, Germany. One of the sons, Valdemaras (Waldemar) (1834-1910), was one of the founders of Vilnius Scientific and Artistic Museum and its society. He was very fond of embroidering. The Museum of Applied Art and the Museum of Church Heritage keep chasubles with coats of arms of Četvertinskiai and Slizieniai which are thought to be embroidered by Valdemaras Slizienis.

A decorative antependium of Vilnius St. Joseph Church with leather imprints is also associated to the Slizieniai family and Rapolas's daughter Rita Slizieniūtė (Rytta Slizien) (1840-1898). At the moment it may be found in the funds of the Lithuanian Art Museum.

In the late 19th and early 20th century, an angel sculpture was placed near the chapel of Liubavas Manor. The sculpture is thought to be cast from zinc in one of Warsaw foundries. The ingot suggests that it is an original work, the author, however, is unknown. Around the 1970s the angel was broken by electricians cutting a nearby tree. Even though cracked, without hands and the cross, it stood there up to 2003, when it was stolen. We believed that we had to return the angel to Liubavas, therefore in 2009 we restored it with a help of photos and authentic technologies. I hope that Liubavas angel will protect Liubavas from challenges of the 21th century and encourage people to take care of their heritage.