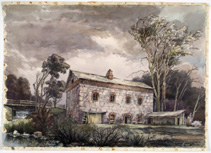 Liubavas Manor watermill. Watercolour by Arūnas Paslaitis, 1995
The invention of watermill is attributed to ancient Greeks.
Greeks invented waterwheel and toothed gearing using which the rotation force can be transferred in different directions.
Mills were highly valued.
They were of great significance for the economy of countries, warfare and culture development. A wind or water mill was often portrayed in the background of religious pictures.
The development of mill construction generated increasing new and new methods of water energy usage.
In addition to grain processing the watermills were used to produce paper, wood cutting, timber and metal processing. Making of fabric, processing of cotton, weaving of cloth, carpets and felt kersey were also performed in the watermills. The installation of the bellows in the watermills enabled to make the arms, coins and gunpowder and to produce metal goods.

Renewable energy sources and efficient generating and use have evolved into a quite relevant topic in modern world. As the energy shortage increases, the new ways to provide people with electrical, thermal and mechanical energy are explored. Renewable energy sources are natural resources originated from natural or man-made processes. Such sources in contrast to widely used fossil fuel, say oil or gas, are theoretically endless, so it is very important to use it properly and efficiently, with special focus on minimizing adverse effect for nature. Ecology became especially significant criterion for evaluation of energy source, particularly when irreversible effect on nature and people could be made if it is ignored.

Although environmental friendly and renewable energetic has become a great concern only during last years, it does not mean that it did not exist previously. Obviously, the demand and the amounts of consumed energy were considerably smaller. Actually, until the oil became as the main source, the energy demand of the majority of people was satisfied by the renewable natural energy sources. The amount, application and use of these sources were dependant on the level of technology. Two of the most environmental friendly renewable sources, which were mainly used by people and developed in the course of time all over the world, were wind and water energy. These sources are theoretically unlimited in our environment and the use of such sources usually has no adverse affect on the nature.

Wind energy has been used by humans for more than 5500 year. Sailing ships and room ventilation by wind driven fans were the first practical application examples of wind energy. Later, when windmills appeared, people learned to convert the energy of wind into the mechanical energy. Windmills quickly spread everywhere wherever wind was sufficient during entire year and where other easily accessible sources, such as water, were not available. Usually windmills were used for grain milling and water pumping to the irrigation systems where water was not accessible naturally or for draining the land to make it suitable for agriculture. Windmills were built in highlands or fields with enough space for wind to gain acceleration. In addition to wind speed, important factor is stability of wind. Therefore many of windmills were built on seashores where the constantly blowing sea wind wheeled windmills more days than elsewhere.

With the appearance and spread of the electric power, windmills lost their importance as suppliers of mechanical power because of limited output, instability and dependency on geographic location, though they still retained their function of electricity production. First wind power plants started to be operated at the end of 19th century, however, they were not very practical. Later, during the second half of 20th century, the revival of the interest in wind energy immediately increased development of technologies and appearance of more efficient wind power plants. The right application of technologies would result in the amount of energy generated from wind exceeding the total amount produced from all other technologies of the world today. This means that the wind energy is still one of the main alternative energy sources today.

Water or, to be more precise, the flow of water as the endless source of energy is known for ages. People learned in ancient times how to convert the energy of water flow to mechanical energy. Typically, watermill or waterwheel was used for this purpose. Other relatively simple approach how to make use of the water flow was to bring the water of river or stream to the higher lands using the water pumps or just to change its direction. In such way the water was transferred to the irrigation systems or to populated locations. Water energy was accessed rather easily, as from ancient times settlements were usually built near water sources such as river, stream or lake. Constant flow of water ensure virtually infinite source of energy.

The invention of watermill is attributed to ancient Greeks who invented waterwheel and toothed gearing using which the rotation force can be transferred in different directions. From Greece the watermills rapidly spread to the rest of the world. In the course of time three main types of watermill developed. The usage of watermill depended mainly on geographic location and available resources. Waterwheel can be driven by the water flow through the bottom or the middle of the wheel or the water falling from above. The latter was the most efficient and the latest invention. In this case, a dam was built or watermill was constructed near a waterfall. Originally watermills, like windmills, were used for grain milling and later, as design of watermill developed, the number of applications increased. In addition to grain processing the watermills were used to produce paper, wood cutting, timber and metal processing, arms forging. Making of fabric, processing of cotton, weaving of cloth, carpets and felt kersey were also performed in the windmills. The installation of the bellows in the watermills enabled to make the arms, coins and gunpowder and to produce metal goods (e.g. nails, needles), mill the mined ore or cast the lead. Often watermills were used for oil producing. The watermills were valuable objects because of their wide range of use, therefore they often were built in state owned land and had significant influenced on country economy, military power and development of culture.

The use of renewable sources constantly developed during the history of humankind. Water, wind and biomass were easily accessed and widely used. Only later they were replaced by electricity and a variety of fossils. After realizing that rational and environmental friendly use of energy sources is vital for human and surrounding environment, the known alternatives were reconsidered. These alternatives are the endless energy from the nature itself and could last for thousands of year.