Liubavas manor » Discoveries » The experience of restoring the officine and orangery, 2014–2015

Gintaras Karosas, founder of the museum and manager of the project
Coat of Arms Uszacki
Dear all,
In 2014–2016, the museum of Europos Parkas in association with the Norwegian Institute for Cultural Heritage Research completed a project to restore the 18th century baroque architectural ensemble of Liubavas Manor in Vilnius District, Lithuania, and to customise it to serve a cultural and public function. The project involved the restoration of the Officine (Treasury) and Orangery buildings that had been in critical condition all the while preserving as many of the authentic features – the original heating system, fragments of plaster mouldings and polychromy, deformations of building walls – as possible to bear indisputable witness to the touch of the course of history. The crumbling buildings were built with semi-encaustic clay bricks. Even the biggest heritage enthusiasts believed there was no point in trying to preserve the ruins. Yet our efforts to keep this extremely rare landmark of cultural heritage as a source of knowledge for future generations received the support of the Kingdom of Norway, Iceland, Lichtenstein, and the Republic of Lithuania through the financial mechanism of the European Economic Area. Thank you from the bottom of our hearts, our dear sponsors! For us who explore and design the Liubavas Manor museum, another memorable thing about the project was that the latest historical discoveries brought the date of the beginning of the written history of the Manor back to early 15th century. The first known owner of Liubavas Manor was Jonas Goštautas (1383–1458), marshal of the court of Vytautas Magnus, Lithuania’s greatest ruler of all times. Liubavas Manor stands out not only in its unique architecture and natural landscape, but its peculiar history as well. Hardly can we find another landmark of this kind located near the capital city of Vilnius that would have such a rich history of exceptional owners representing the political, cultural, and intellectual elite, uncompromising patriots of Lithuania and sometimes even actual rulers of the country. Even though the Manor has faced hardship many times, it has survived and has been reborn in another form – as a museum, its mission to study and to preserve this asset of cultural heritage for future generations as an effort in public education. We wish you many meaningful discoveries as you make your way around the extraordinary Manor of Liubavas.
Liubavas Discoveries   Restoration of Watermill   Restoration of Baroque Ensemble   Archeological Findings 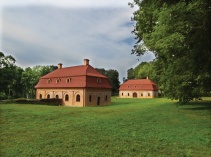 The Orangery of Liubavas Manor, 2016

Liubavas Manor Officine and Orangery before the restoration, 2014

The start of the buildings' restoration, 2014

The start of the Officine's restoration works, 2014

Liubavas Manor Officine and Orangery before the restoration, 2014

The experience of restoring the officine and orangery, 2014–2015

The restoration was aiming to convert the officine and orangery of Liubavas Manor into a museum so that the buildings could be used as exhibits to the maximum extent possible. Conversion is the thing that ruins the historical aura of buildings the most. Therefore, we were doing our best to preserve the traces of time on the buildings as they were being restored. After all, it is the traces of time that are our most valuable possession.

The walls of the officine had sunk into the soil to a depth of up to 30 cm: the long front of the building facing the courtyard had subsided the most, while the settling of its southern corner was less pronounced. Concrete buttresses were installed there during the Soviet era to prevent the eastern and southern wall of the building from collapsing. Once the foundations of the building were placed on a solid ground and the walls reinforced with bands and the buttresses removed, the signs of time became evident. The long facades of the officine going upwards had been deformed so badly one might wonder if this had not been the architectural idea. Near ceilings, the building has expanded by more than 40 cm. The planes of the reinforced elliptical walls are in a condition that defines the state of deterioration of this cultural asset. Many years ago in York (UK), I saw a wooden building that had been bent out of shape by the passage of time, its front wall hanging over the street, and this image has been etched deeply into my memory. Now in Lithuania, too, we have the Liubavas Manor officine with an impressively transformed stonework wall that had been frozen in place.

To drive the foundation deeper, while digging under the foundation, the fattest layer of dirt up to 1.8 metre deep was found where the sections of the walls had settled the most. 16th century tiles, crockery, and remains of wooden planks were found beneath the foundation of the southern wall. The soil under the foundation has many layers as if to prove that a lot of historical layers of culture were buried there.

The northern wall of the orangery was ¬close to collapsing and has been supported with struts. The wall had listed in its entire depth and the efforts to stabilise it have been successful. Now walking through the door that mirrors the direction of the wall is quite an amusing experience.

The ceilings and the roof

The ceilings and the roof of the officine and orangery were not original and had to be restored based on investigation material. The early period was chosen when the officine is believed to have served as the Manor's treasury, and the servants and the orchestra, K. Tiškevičius tells us, still lived in the two-storied portal. A polychromic investigation has discovered as many as 18 stratigraphic layers of paint in the northern room of the officine. The massive open beams supporting the roof with the attic have been restored.

The northern part of the officine had wooden floor that were believed to have been original. Removing the floorboards during restoration ended up in a surprise find: a second floor covering the entire area of the room. Authentic red-brick paving was found underneath the Soviet-era concrete in the smallest north-western room, and an authentic fragment of the pavement has survived near the wide door. Over hearths were found between the small rooms and in the middle of the big room - those latter had most likely been built at a later time, with the room split with a wall to build an oven.

We wanted to preserve as many of the ample layers of plaster and mouldings in the officine as possible. Polychromic probes were instrumental in our efforts to reconstruct the interior of the building. We did not want to recreate any one particular solution as that would have meant returning to a layer after the original. The doors and windows of the officine and orangery were manufactured to the tradition of the era (note the thickness of the interior doors!), the doors were painted one of the original colours of the walls that were identified during a polychromic investigation; also, considering the first layer usually constitutes primer, the crumbly patches of plaster were painted the colour of the second stratigraphic layer.

A heated wall of the orangery has been preserved and fragments of the underground heating system have been uncovered for display, an 18th-century stove has been reconstructed on the basis of tiles found in the building.

To find out more: