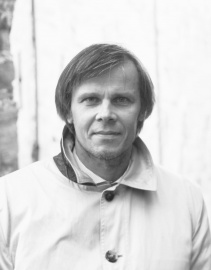 In the late 20th century, founder of the open-air museum Europos Parkas Gintaras Karosas (born in 1968) took up the initiative to explore, preserve and adapt the Liubavas Manor estate for cultural and public needs.

At the age of 19, the artist started creating the Europos Parkas in an abandoned forest, which has become one of the landmarks in Lithuania. At the beginning of 1993, Gintaras Karosas established the first-ever non-governmental organisation museum in Lithuania and runs it to this date. The sculptor has created works of sculpture, landscape art and architecture, which now can be found in the Europos Parkas, initiated and supervised many international projects. His is the author and the artist of the whole 55-hectare artistic landscape in the Europos Parkas. It has been created and developed for three decades.

For his merits for culture and national progress, in 2006 Gintaras Karosas was awarded the National Advancement Prize, which is sometimes called the Lithuanian Nobel Prize. Gintaras Karosas is also the author of books, photographs, reports, an active Lithuanian cultural, art and public figure.

Gintaras Karosas is a descendant of his grandmother's noble family which was awarded the Uszacki coat of arms, a variety of Junosza coat of arms, for the military merits. The coat of arms displays a lamb with a bleeding side and a broken horseshoe and an arrowhead above. As a bearing in heraldry a lamb symbolises patience, endurance and courage. The Nobility was awarded in the middle of 17th century at the wars with the Moscow State when, according to K. Niesieckis (K. Niesiecki), one of the progenitors, the son of noblewoman Potiomkina from Smolensk voivodship, commanded the defence fights of the Liucinas castle (Lucyn, Ludza, Lutzen) (now in the territory of Latvia) and was wounded.

Another Coat of Arms of the Karosas (Karas) ancestors might have been Dabrova (a horseshoe and three crosses in a blue background). The coat of arms was awarded to the participant in the first Crusade as early as 11th century for courage in defending the Saint Sepulchre in Jerusalem. Back from Palestine he settled with his family in Poland and left many descendants. However, the lack of documents prevents from proving the legitimacy of the coat of arms to the Karosai family living in Lithuania.

In 2008, after the legitimisation procedures, Gintaras Karosas became a member of the Lithuanian Royal Union of Nobility.