Świat, Coat of Arms of the Slizieniai (Slizień) family
The real Golden Age of the estate was in the 19th c., when the Slizienis (Slizień) family, ruled.
The family history shows that this lineage was truly a representative of the Grand Duchy of Lithuania and had preserved the national values even when the state had not existed any more.
From 1892, Liubavas was owned by children of Kamila and Rapolas – Valdemaras, Gustavas, Henrikas and Ritta. After the family split the property on 5 May 1912, Liubavas Manor was owned by the son of Gustavas – Rapolas Jonas.
The Goštautas family   Royal Family   Mikalojus Radvila Rudasis   The Golejevskis family   The Krišpinas Kiršenšteinas family   Teresė Tyzenhauzaitė   The Tiškevičius family   Rapolas Slizienis   The Slizienis family   Gintaras Karosas 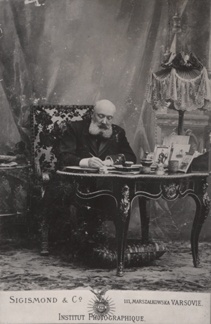 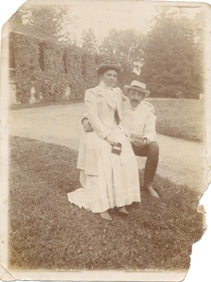 The Slizienis (Slizień, Ślizień) family played an important part in the history of Liubavas. The family ancestors came to Lithuania from Hungary. The oldest member was Andrius Ratša Slizienis. He came from Septynpilis (Siebenburger) and served Vladislovas Jogailaitis (Władysław II Jagiellończyk), the son of the King of Poland and the Grand Duke Jogaila (Jagiełło). In 1436 Ratša was in Lithuania already and received large territories in Smolensk. This family had a coat of arms for centuries the "Świat" and had the title of count.

The first Slizienis family member to live in Liubavas Manor was Rapolas Slizienis (Rafal Slizień, 1804–1881). In 1832 he married Kamilė Tiškevičiūtė (Kamilla Tyszkiewiczówna). He became famous as an artist and with his sculptures and medals represented the Vilnius school of romanticism.

Rapolas and Kamila had a large family with four sons and two daughters. The eldest son was Jonas (Jan, ~1833–1878). It is thought that in 1852 he wrote a play for golden wedding anniversary of his grandparents Jonas and Anelė. Henrikas, Gustavas and Rita (Henryk, Gustaw, Ritta), Rapolas' other children, also participated. In the play fostered family values are emphasized: pride in family, country, Lithuania, the great lineage, and friendliness. Further family history shows that this lineage was truly a representative of the Grand Duchy of Lithuania and had preserved the national values even when the state had not existed any more.

Rita (Ritta, 1840–1898) was the eldest daughter. According to Ipolitas Korvinas-Milevskis (Hipolit Korwin Milewski), she, like her mother, was attractive and was a very good orator. Rita was very devoted to the Catholic Church and on 7/6/1879 she received the honourable title of canon of Munich St. Ann Church from the King of Bavaria Ludwig II, which was confirmed on 22/01/1880 by the Russian Emperor.

The youngest daughter Marija (Maria) had a talent for sculpture. She learned from her father and later from the sculptor Antokolskis (Antokolski). Later Marija went to Dresden to study with Professor Grüder where she also studied painting. Her work was shown at exhibits in Warsaw and in Vilnius, where she won awards. Marija was married to Ipolitas Domeika (Hipolit Domeyko). She lived in Germany the second half of her life.

Another descendant of Rapolas was Henrikas Juzefas (Henryk Józef, 1845–~1920), who inherited the Volna Manor and settled there with his wife the Countess Ana Kamila Mauros (Anna Slizniowa, 1862–1924). Henrikas was sensitive, emotional, and honest. This was evident in letters where he asked that after his death his money be divided amongst his brother Gustav's sons, and that 2500 roubles be given to Gustav's son Rapolas Jonas who contributed most to the Liubavas mill turbine construction.

Valdemaras (Waldemar, 1834–1910) was the other son, and was an interesting man. Valdemaras Slizienis – one of the founders of the Arts and Education Museum and the arts and education society. He was a bibliophile, a collector of applied arts and antiques, and was a novice of many branches of art. He never married. Relatives and friends used to call him the "General", even though he never served in any army. According to Zofija Tiškevičiūtė Potocka, he knew antique furniture very well, and with her father Vladislovas Tiškevičius, the Count of Lentvaris, he used to discuss art and exchange old works. The "General" Slizienis would often travel abroad, especially to Paris. He often visited Lentvaris and Palanga manors of the Tiškevičiai. The "General" had an interesting hobby. He used to embroider handkerchiefs, church garments and would decorate satin bedspreads with lace. He used to create gifts for women of the Tiškevičiai family. He would also join the children at the home school to read the latest press. Zofija Tiškevičiūtė said that Valdemaras was always very elegant, used to wear fragrant toilet water, was pleasant, and intelligent, even though he sometimes would not spare virulent remarks to those he didn't like. Valdemaras also wrote for the press in Vilnius.

Gustavas Slizienis (Gustaw, 1839(?)–1894) always lived at the Liubavas Manor. He married Elena Domeikaitė (Helena, 1845–1923). Gustavas took care of the construction of the paper factory at the manor, and upon his request, mass was renewed again at the chapel.

The last Slizienis who owned Liubavas was the grandson of Rapolas, the son of Gustavas, Rapolas Jonas Slizienis (Rafal Jan, 1875–1940) and was a victim of Soviet persecution. He became the owner in 1912. He married Stefanija (Stefania, 1879–1934) from the Ževuskis (Rzewuski) family. Jonas Slizienis especially cared about Liubavas, transforming it into a progressive farm for those days. As his uncle Henrikas said, Jonas Rapolas was the main builder of the watermill and initiator of the modernization. Because of his hard work, the mill started earning more money. He also established an impressive horse stable.

Many of the Slizieniai family are buried at the mausoleum of Liubavas chapel.