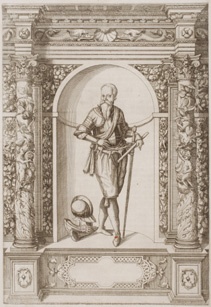 Another famous owner of the manor at the time was Vilnius Voivode and Chancellor of the Grand Duchy of Lithuania the Duke Mikalojus Radvila the Red (Mikołaj Radziwiłł Rudy, 1512-1584), the brother of Žygimantas Augustas' second wife. He is frequently referred to as the unofficial ruler of Lithuania after the death of the last descendant of Gediminas. He was a descendant of one of the wealthiest families in Lithuania, and even Europe, and was a trustworthy military leader. He was also known as a bright politician, and staunch defender of the Grand Duchy's sovereignty. Even to this day we remember his quote in the Parliament in 1569, where Radvila categorically refused to sign the Treaty of Lublin Union: "Nobody could give us as a present, because we are free people..." Radvila also became famous as a strong supporter and prophet of the reformation, concerned with establishing schools, and with inviting educators from other countries.

Radvila the Red changed his ancestral manor Rokantiškės for Liubavas, it might be because it was in a very good location, along the way to the residence in Dubingiai.

The famous Radvila manor house in Dubingiai belonged to Mikalojus Radvila the Red. The road used to travel there went past Liubavas Manor. It is not unusual that once he annexed it, he started to expand. Contemporaries at the time said he lived no worse than the king, so therefore, his table should be full of Liubavas bounty.