Coats of Arms of the Polish–Lithuanian Commonwealth and the Jagiellon dynasty
In the middle of the 16th century Liubavas Manor was owned by Grand Dukes of Lithuania.
Liubavas estate had a lot of ponds, Molėtai lakes and rivers full of fish. At the time fish was considered one of the most valuable products. Liubavas was also famous for its forests. It provided its products to the royal Vilnius Manor.
The Goštautas family   Royal Family   Mikalojus Radvila Rudasis   The Golejevskis family   The Krišpinas Kiršenšteinas family   Teresė Tyzenhauzaitė   The Tiškevičius family   Rapolas Slizienis   The Slizienis family   Gintaras Karosas 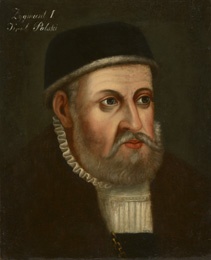 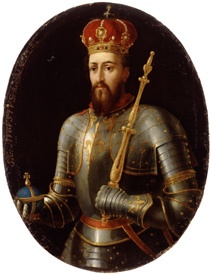 After the Goštautai family died off, in 1542 the Liubavas Manor was transferred to Grand Dukes of Lithuania under the ishmara law, meaning that it became the state property. In approximately 1544, this estate was owned by the young Grand Duke Žygimantas Augustas (Sigismund Augustus), who received it from his father, Grand Duke of Lithuania Žygimantas Senasis (Sigismund the Old, 1506–1548).

There is a great deal of information written about the Grand Duke of Lithuania and Poland's King Žygimantas Augustas (1520–1572), and everyone unanimously agrees that he was indeed a man of the Renaissance. He propagated a different way of thinking based on new ideas of humanism, and introduced many new trends. His rule, as that of his father, is called the Golden Age of Rule in the Grand Duchy of Lithuania. The young king devoted a lot of attention to culture, and invited countless numbers of scholars and researchers from Italy, compiled an extensive library (which later was given to Vilnius University), he supported the Jesuit order's activities, and completed the construction of Vilnius Lower Castle.

He loved luxury in many aspects of life, and especially in the kitchen. So it comes as no surprise that at his manor homes, like Liubavas, he applied the latest innovations in fishery. Other important economic reforms are closely related to Žygimantas Augustas' name too. The most famous land reform was his mother's Bona Sforza agrarian land reform.Liubavas was one of the first estates where agrarian land reform was implemented.

The King's foreign policy was known for peaceful relations with neighbouring countries. Despite that, the Union of Lublin Treaty, initiated by Žygimantas Augustas might be considered one of his greatest mistakes, because it was not useful for Lithuania. For romantics, this ruler is best remembered as a hero for his undying love of Barbora Radvilaitė (Barbara Radziwiłł), and thus made her family name famous.